The portable entertainment system delivers high-performance, weather-resistant stereo and 360-degrees of sound in a durable design.

Since its introduction in 2004, the Bosch Power Box™ has been an award-winning jobsite staple, smartly blending both entertainment and function in an unmistakeable design. This year Bosch has delivered even more capability with the introduction of the Bosch Power Box™ PB360C Jobsite Radio/Charger/Digital Media Stereo, which leverages signature 360-degree speakers with Bluetooth® technology.

Now crews on the jobsite are able to stream internet radio, stored music and more from their smart devices. With a connection range of up to 150 feet, the Bluetooth technology allows users to move freely around the construction zone without being tethered to a cable, and without fear of losing sound quality. It can all be controlled on the free Bosch PowerBox smartphone app.

Jim Stevens, product manager, Robert Bosch Tool Corporation. “The Bluetooth compatibilty in the PB360C version allows for more entertainment options than ever before. Plus, with the signature four-way speakers and subwoofer that projects stereo sound in every direction, this is the most advanced radio we’ve produced to date.“

And while Bluetooth connectivity provides those with smart devices the freedom to move around, users without Bluetooth technology can still enjoy the crisp and powerful sounds. Entertainment via a personal electronic device plugged into the aux-in port plays a big role as well. The Power Box’s digital media bay offers a secure, weather-sealed storage area for electronic devices while delivering sound via an auxiliary input port.

As with previous versions of the Power Box, the PB360C still features a powerful AM/FM radio with advanced digital tuning, that easily locates 20 FM and 10 AM preset stations. There are four preset equalization mixes  and the user can also customize the bass and treble as desired.

The unit can run on either a 120V AC outlet or a Bosch 18V Li-ion battery. When powered from a 120 V AC outet, the Power Box can be used to charge Bosch cordless 18V Li-ion batteries. In addition, users can power other 120V AC devices by plugging them into one of the four-way power outlets on the unit.

The Bosch PB360C also offers a USB port to plug in and charge electronic devices like smartphones, whether the PB360C is powered through an outlet or by a Bosch Li-ion battery.

It all comes in the distinct and rugged aluminum and rubber roll-cage design that suspends the radio and its 360-degree speakers inside the cage. This weather-resistant (with an IP54 rating) and shock-resistant entertainment console can easily take on the toughest jobsite environments, all without missing a beat. 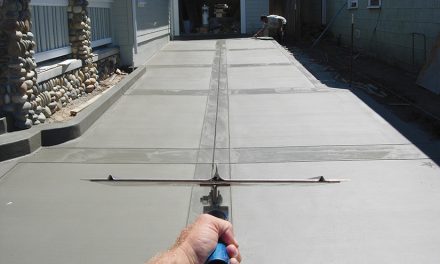 Sealing Up Manholes: Inflow and Seepage Solutions from CRETEX